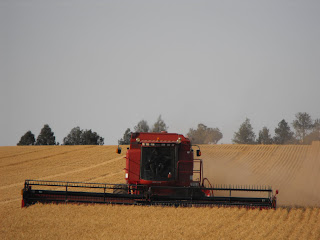 After 6 long weeks our 2009 harvest finally finished about 10 days before Christmas.

In my previous post I said that I was to drive the tractor and chaser bin for the duration - well, plans changed when the header driver we organised had to cancel due to poor health. That left us in a bit of a pickle, so it was decided that I would learn to drive the header. I was a bit daunted to start with but once I got the hang of the 36ft front, I did okay! 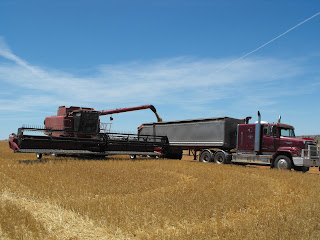 We were stopped a couple of times due to high temperatures and wind which makes it too dangerous to continue harvesting because of the fire danger it causes. We also had a few days of wet weather which was really annoying, as Farmer Phil and I just wanted to get harvest finished and forgotten as it was another very poor year regarding lack of rainfall and well below average yields for the crops.

Hi Donna, 6 weeks of harvest isn't so bad... I registered my truck for 3 months for harvest... and I drove it for the full three months, right up to the very last day. That's right, our harvest went from the first week of November thru to the First week of February.

Whoa Farmer PJ, I'm glad I'm not there for your havest!! We sow 5000ac each year, so our harvest days are long and sometimes never-ending for the 6 weeks! Farmer Phil and I complete the harvest ourselves with him driving the semi and me in the header. Let's hope for a much better 2010 for all farmers Australia-wide!!! Regards, Donna.