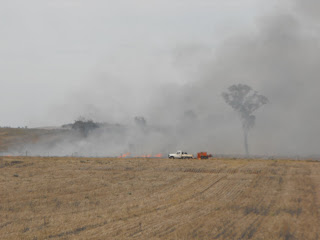 My father in law Farmer Noel in the ute and fire fighting unit burning stubbles
We don't normally burn our wheat stubbles from the previous year before we sow into them, but as last year was such a good one with high yielding wheat crops, we've had to burn the stubbles this year as they are just too thick for the cultivator to get through. If we didn't burn the stubbles then the cultivator just gets blocked up with all the straw in a huge tangled mess which takes ages to clean up. We would much rather keep the stubbles because they act as a mulch for the new crop coming through to help retain moisture and protect against frost - much like in your own small house garden, just on a much bigger scale!
PS - The reason we haven't burnt stubbles in the last few years is because we've been in a serious drought (since 2002 actually!!) and the wheat crops have been very low yielding and thin, so they were much easier to sow into the following year!
Posted by Donna at 8:03 AM