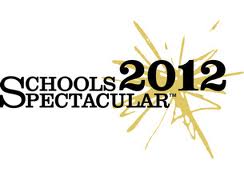 Emma has had a very busy year with her singing.  The biggest event for her was the Schools Spectacular in Sydney last weekend.

Earlier in the year she auditioned to be a Featured Artist (soloist) for the show.  It required a dvd audition first.  She was successful after this round out of 600 auditionees.  It was whittled down to 200 kids so a trip to Sydney to audition again was required.  She was successful in this round also where it was whittled down to 100 kids left.  The next audition was in Sydney again but Emma unfortunately picked up a head cold and lost her voice the week of the audition so she wasn't picked to be a Featured Artist.  Although she was disappointed she knew that she'd done exceptionally well to even get that far!!

Anyway to cut a long story short, Emma was then asked to audition to be a member of the Core Choir - 30 high school children with microphones who are the main backing vocals for the whole show.  She made it through that process and after many more trips to Sydney for rehearsals the Schools Spectacular shows were finally on at the Sydney Entertainment Centre on Friday and Saturday last week.  We unfortunately couldn't go to any of the shows as we're in full swing with harvest!  Emma was kindly billetted by another Core Choir family so that made out lives so much easier!

Next year Emma will be in her final year of high school but she is definitely going to try again to become a Featured Artist! 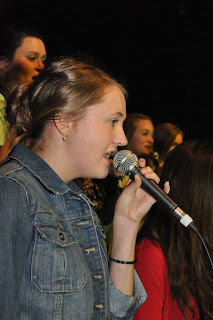 Emma's photo made it into the local paper during one of the Core Choir rehearsals in Sydney.