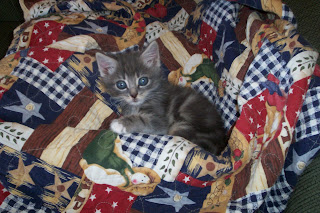 Isn't he the cutest kitten ever?!!

This is Squirt. He's not feeling the best at the moment. On Sunday he was holding one of his back legs up to walk, and then on Monday it all swelled up. I was thinking the worst, that he'd either broken it trying to jump out of his box or he'd hurt it wrestling with his brothers. Squirt is tiny compared to the others.
I took him to the vet where they did an x-ray and confirmed that there was no broken bones. But he suspected an infection or abscess in his leg. The infection was syringed out as much as possible and now Squirt is on antibiotics for the next 14 days. He's still holding his leg up to walk, but the swelling has reduced a lot since Monday.
As you can see from the photo he is thoroughly spoiled. He's got a nice soft quilt to lay around in which is up on the lounge so that he's away from his two rough brothers.
Squirt is supposed to be going to good friends of ours, but if he's going to be high maintenance, then I think they'd be better with either Fatty or Sooty. Till then, Squirt will just keep demanding my attention!
Posted by Donna at 1:23 PM