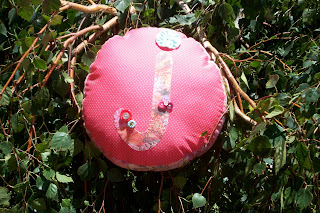 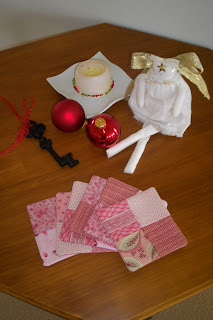 It's been a while since my last post as I've been in Canberra with Daniel who had craniofacial surgery last week. He was born with a mouth which didn't open very wide, and it was decided about 2 years ago that this was a danger to him if he needed to be intubated in an emergency. Over the past 2 years he has endured wearing a splint between his teeth, and an arthroscopy procedure which didn't work, so more invasive surgery was needed.

The doctor's were very happy with the results, but Daniel will have to do lots of physio exercises to get his jaw moving and opening normally.
I'll show you some of the gifts I've been sewing for Christmas. I can't show you some as the recipients read this blog!
The first is an initial cushion for an elderly neighbour who now lives in a nursing home. It's really hard to think of presents for her. Then there are some criss-cross coasters which we gave to Emma's choir teacher. I've got another set cut up and ironed ready to be sewn for Emma's singing teacher.
Posted by Donna at 2:57 PM