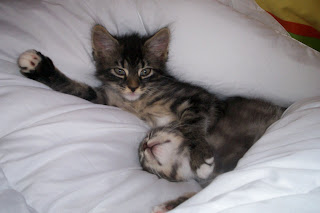 This is the kitten that we called Fatty as he was the biggest and he always had a huge, fat tummy after he drank his milk. He's been adopted by good friends of ours, Andrew and Michelle and their two daughters Lucy and Hannah. They originally wanted Squirt, but with his leg still wonky, I suggested they take Fatty instead. He's very sweet and playful and I hope they'll be happy with him. Fatty and Squirt made themselves at home on Emma's doona this afternoon.
Posted by Donna at 5:38 PM