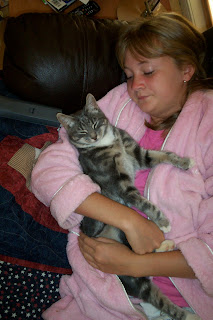 I told you a few months ago when Squirt was about 3 or 4 weeks old that he had a sore leg and I took him to the vet to investigate. I had Squirt de-sexed last week so I asked the vet to take another look at this leg while he was there. She x-rayed it again and found that he did in fact have a green stick fracture on his left femur. It's obviously healed now but it has twisted slightly so that the femur doesn't fit into the knee joint properly so that is why he limps on it still. He'll always have a wonky leg, but it doesn't give him any pain.
Here is Emma spoiling Squirt as usual! He loves Emma's dressing gown because it's really soft towelling. He digs his claws in and sucks it!
Posted by Donna at 1:46 PM