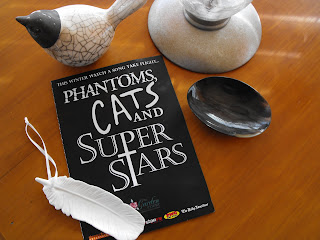 We're half way through our school holidays at the moment which have turned out to be busier than the school term!
Firstly Emma has been performing in a cabaret/dinner show at a restaurant in Wagga. She had her final show last night after 6 performances over 10 days. Before the shows even began we were doing lots of miles in the car for rehearsals.
The show was called "Phantoms, Cats and Superstars" and featured songs from Andrew Lloyd Webber/Tim Rice musicals such as Evita, The Lion King, Joseph and the Amazing Technicolour Dreamcoat, and Beauty and the Beast. Emma had a wonderful time performing and can't wait to be in another production!
Ryan has been at a Winter Water Ski Training Camp at Stoney Park on the northern NSW coast for the week. Emma was also supposed to attend but it clashed with her show so she opted to stay home. Ryan has returned home tired but very happy that he improved his slalom, trick and jump events. All Farmer Phil and I have to do now is keep up his training over Winter to be ready for the ski season which starts in September. Ryan also informed us that he "needs" a new slalom ski!! We'll see about that!!
Posted by Donna at 10:46 AM