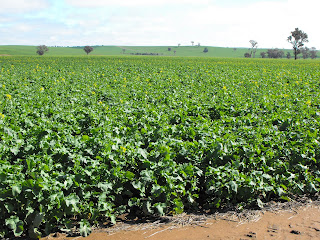 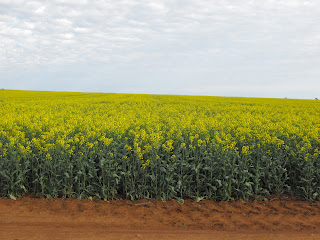 These two photo's are of our Cobbler canola crops from 2010 and 2009. The top one was taken today - 13th August 2010, and the bottom one was taken on the 16th August 2009. It is amazing the difference in them as far as how advanced they are. This year's canola was sown 3 days earlier than the 2009 crop.
It's clear to see that the 2009 crop was almost out in full flower and struggling for moisture. This was due to last year's drought conditions so the crop was desperately trying to reproduce no matter how tough the conditions.

This year's canola has had lots of rainfall right from the time it was planted at the end of April. It looks lush and healthy with just a few flower heads beginning to emerge. This is how canola should look in August!

Our rainfall to date this year has been 544.5mm as compared to last year's rainfall total at the same time of just 206mm!

So it just goes to show that all we farmers need to grow a decent crop is RAIN!!!! Fingers and toes crossed that rain keeps falling in September and October.
Posted by Donna at 11:14 AM