Farmer Phil says that I don't have enough "farm stuff" on my blog! Even though it's called "The Farmers Wife" I think I should be able to put whatever I like on it!!!

Anyway, I just took a quick drive around a couple of paddocks near the house to take some photos of the crops. The first one is canola almost out in full flower. The canola crops are all a bit behind to what stage they should be because we had to re-sow them after the mouse plague decimated them. This one was re-sown 3 weeks after the first attempt. If we receive some nice Spring rain they shouldn't feel any effect from the late re-sowing - fingers crossed! 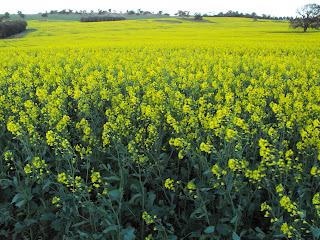 This is a paddock of wheat in front of our house - I look at it from my kitchen window everyday. It's really come along in leaps and bounds after some nice mild weather and rain over the last month. More rain is needed in September/October for the wheat to yield high. 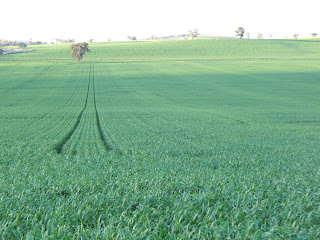 It's lokking good Donna. Fingers crossed you get a nice soft and wet finish...

Donna...don't be bullied by those boys!!! Phil could start his own blog and fill it with farm stuff...Might save phone bills do you think????? Probably not Michelle