I was in again Sydney this week for 3 days with Ryan who was having another surgery to straighten his jaw at North Shore Private Hospital. Check my post from last year about Ryan's story.

I took the photo this morning to show the site where he's had ten operations to try and get his jaw straight - it's a bit swollen at the moment though! The original bone graft surgery was done when he was 6 years old. The rib bone that was used keeps growing at a faster rate than Ryan does so it's necessary to have it reduced every 12 months or so until he stops growing. This is an unknown factor - Ryan will be 17 later this month and he's already 6ft 1 tall (Farmer Phil is 6ft 3). Once he finishes growing there will be a final operation to get the jaw straight and his teeth aligned correctly.

You can also see Ryan's reconstructed ear which was done when he was 10 years old using cartilage from behind his rib cage and skin grafts from his scalp. It's amazing what the surgeons can do these days because when Ryan was born his only choice then was a prosthetic ear which would be attached to his head with magnets!! 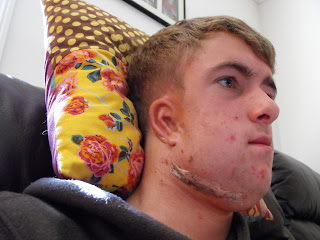 Not a very flattering photo of Ryan but you can see the work that's been done.
Posted by Donna at 10:48 AM