We've had a rather interesting week here on the farm! Farmer Phil and Ryan have been busy getting ready for cropping time which will start in about 3 weeks. There are bags of wheat (almost 4,000T of the stuff!) still laying in paddocks - the market for wheat is very slow at the moment and selling it will take some time. There is a lot of spraying to be done in preparation for sowing, and we've also got about 250T of lime to spread on some paddocks where the pH level is a bit high.

Over the weekend we had the NSW Waterski Championships in Albury which included a presentation night for the 2011/2012 season. Emma was the entertainment for the evening where she sang while everyone mingled and had dinner. It was rather lovely with her singing quietly in the background - "Sweet Home Alabama", "Landslide", "American Pie" to name a few of the songs. 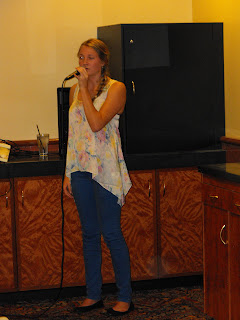 Ryan came home with a couple of trophies - 1st in jump and 3rd in trick. It's rather surprising that Ryan does so well in trick because it's much easier if you're on the short side whereas Ryan is nudging 6'2"!

Ryan also took home one of the major awards for most improved in the jump event. There are 3 most improved awards given out for slalom, trick and jump and also an overall. Two years ago Ryan won the slalom award, then last year the overall, and now this year the jump. 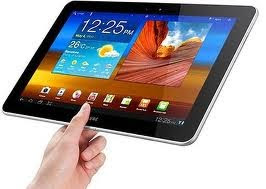 This year the prizes were Samsung Galaxy Tablets! Ryan was super excited to receive one of these! 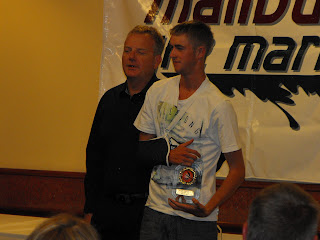 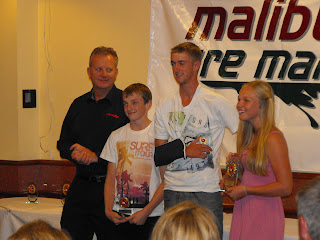 3rd in trick with Brodie and Riley taking the other places

As you can see in the photos, Ryan has his arm in a sling! This is what made the week very interesting!

He was changing a flat tyre on Farmer Phil's ute when an accident happened with Ryan ending up pinned underneath the vehicle! I won't go into detail about how it happened but let's just say inexperience, soft ground and a 17yo boy not thinking played a big part. Farmer Phil pulled out some super-human strength to lift the ute off Ryan with the help of an adrenalin hit!!
I took Ryan to casualty where an x-ray showed no broken ribs or collarbone, but he's got some soft tissue damage and a very sore collarbone. Needless to say he was very lucky that he wasn't injured more or even killed!
The sad part for Ryan was that he missed skiing in the state titles over the weekend. But worst of all is that the Australian National Waterski Championships start on Thursday this week at Mulwala, NSW. Ryan qualified in all three events (slalom, trick and jump) for Under 17 boys.
We're off to the physiotherapist this morning to talk about what strapping and precautions he'll need because he's determined to ski over the weekend! Let's hope it all works out okay in the end!!
I'm not surprised that farming is classed as the most dangerous occupation in the world - accidents can happen so easily when you mix machinery, animals and humans together!
Posted by Donna at 7:18 AM

What a week indeed! Glad to hear Ryan is ok but talk about stress for you all!