While sorting through photos for the previous post I found some from our holiday in January and realised that I hadn't blogged about it. If you look on a map of Australia you will see that Renmark is just over the NSW border in SA. It's like an oasis when you get there after travelling across the desert for hours. On my birthday it decided to rain a bucket load (100ml) for the whole day. 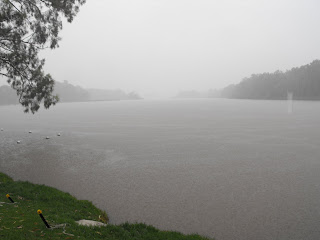 We obviously didn't ski at all that day. Just running to the toilet block in the caravan park meant that you would get soaked to the skin even with an umbrella! 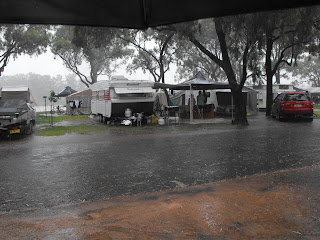 After much discussion we took the kids to see the latest Harry Potter movie for the afternoon, and then had an extended birthday dinner at the club. 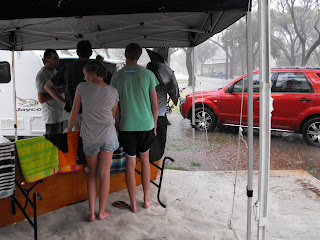 We've never experienced a day like that before in the 22 years that we've been going to Renmark every January. We were sloshing around in ankle deep water for the day!

Anyway, we had a really relaxing 2 weeks away with a manditory sleep in every morning, a lazy late brekkie of bacon and eggs, then an even later lunch, finally finishing with a gourmet bbq cooked by Farmer Phil. There was also the odd ski inbetween! The perfect holiday really!

Thanks Donna... Was overlooking that day in my memory. Blah!!!!! Glad the theatre was dry.