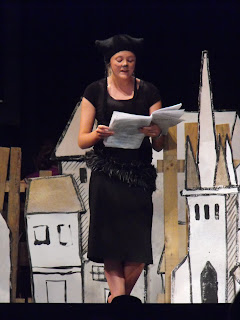 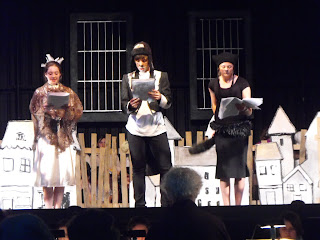 The fearless sparrow, the wise dog and the keen cat. 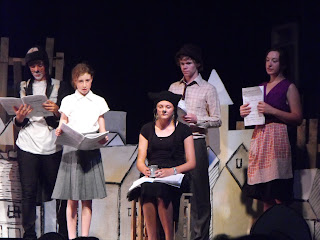 At the weekend Emma was involved in a Children's Operatic Workshop at Morundah which was run by Richard Gill OAM who is the Musical Director of Victoria Opera. They learned and staged a performance of Brundibar after the 2 day workshop. The children were allowed to use their scripts for prompts because this play is normally learnt in a 10 day session! Emma played the part of the "keen cat". Richard did a wonderful job with the children.

One original participant of Brundibar was quoted "when we sang we forgot where we were and forgot how hungry we were".

Krasa and Hoffmeister wrote the opera in 1938 for a government competition, but the competition was later cancelled due to political developments. Rehearsals started in 1941 at the Jewish orphanage in Prague, which served as a temporary educational facility for children separated from their parents by the war. In the winter of 1942 the opera was first performed at the orphanage: by this time, composer Krasa and set designer Frantisek Zelenka had already been transported to Theresienstadt concentration camp in Czechoslovakia. By July 1943, nearly all of the children of the original chorus and the orphanage staff had also been transported to Theresienstadt. Only the librettist Hoffmeister was fortunate to escape Prague in time.

Reunited with the cast in Theresienstadt, Krasa reconstructed the full score of the opera, based on memory and the partial piano score that remained in his hands, adapting it to suit the musical instruments available in the camp: flute, clarinet, guitar, accordion, piano, percussion, four violins, a cello and a double bass. A set was once again designed by Frantisek Zelenka, former stage manger at the Czech National Theatre: several flats were painted as a background, in the foreground was a fence with drawings of the cat, dog and lark and holes for the singers to insert their head in place of the animals' heads. On 23 September 1942, Brundibar premiered in Theresienstadt. The production was directed by Zelenka and choreographed by Camilla Rosenbaum, and was shown 55 times in the following year.

A special performance of Brundibar was staged in 1944 for representatives of the Red Cross who came to inspect living conditions in the camp; what the Red Cross did not know at the time was that much of what they saw during their visit was a show, and that one of the reasons the Theresienstadt camp seemed comfortable was that many of the residents had been deported to Auschwitz in order to reduce crowding during their visit. Later that year this Brundibar performance was filmed for a Nazi propaganda film. The Brundibar footage from this film is included in the Emmy-Award winning documentary "Voices of the Children" directed by Zuzana Justman, a Terezin survivor, who sang in the chorus. Ela Weissberger who played the part of the cat, appears in the film.

Most of the participants in the Theresienstadt production, including the composer Krasa, were later exterminated in Auschwitz.

The plot of the opera shares elements with fairy tales such as Hansel and Gretel and The Town Musicians of Bremen. Annette and Little Joe are a fatherless sister and brother. Their mother is ill, and the doctor tells them she needs milk to recover. But they have no money. They decide to sing in the marketplace to raise the needed money. But the evil organ grinder Brundibar (who represents Hitler) chases them away. However, with the help of a fearless sparrow, keen cat, and a wise dog, and the children of the town, they are able to chase Brundibar away, and sing in the market square.
Posted by Donna at 1:37 PM No comments: 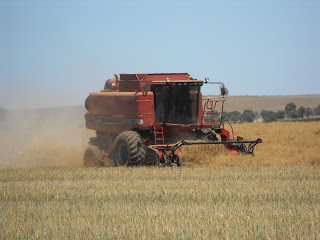 Yes, harvest has finally started for us. The canola has been windrowed for more than 10 days, so it's just right for harvesting now. So far the yields haven't been anything startling, but we'll wait and see how they go as we progress. We're not expecting a great harvest after the low rainfall figures for the year. 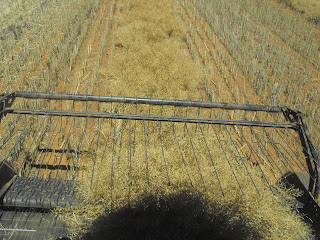 This photo shows the windrow of canola being fed into the header. I learned to drive the header this afternoon. I've never had a go before and as Farmer Phil drives the semi trailer, I volunteered to drive the header. We've got a man coming next week to take over when we start the cereal crops, but I'm happy to plod along in the canola. I'll then drive the tractor and chaser bin for the rest of harvest which should take 4-5 weeks.
Posted by Donna at 5:44 PM No comments:

Our Day With Sam and Jenny Bailey

Wow, what a whirlwind week we had last week which culminated in over 350 people crammed into our little hall to listen to Sam and Jenny Bailey tell their story. We had a huge response to the night with people coming from miles around to listen. There were many comments at the end of the night that we need to do it all again next year!! 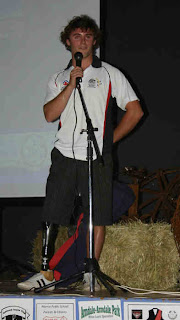 We asked Scott Reardon to speak to the crowd about his latest water skiing achievement of becoming the World Overall Disabled Water Ski Champion after the World Championships held in France in September this year. Scott has overcome great adversity just like Sam after losing his right leg in a farm accident when he was only 12 years old. Scott is now focusing on an athletics career and is training hard with the ambition of becoming a member of the Australian Paralympic team for London 2012. He is a very determined and talented young man and we wish him all the best for his future. 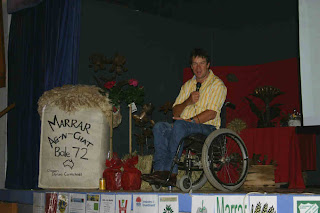 Sam had us all enthralled as he told his story from his childhood raised on a family farm, to his jackarooing experiences in the NT, to his tragic accident which left him a quadriplegic, to his long rehab in hospital and then back home with his parents, to learning how to farm from a wheelchair, to finding and falling in love with Jenny, to his remarkable life of travelling and speaking now. He truly is an inspiration! We certainly have nothing to complain about!!! 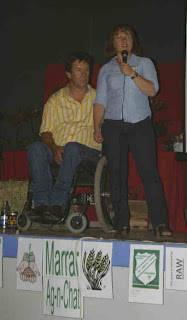 Jenny spoke about how her relationship started with Sam and how much she enjoys her life now even though it's not quite what she'd envisaged for herself. 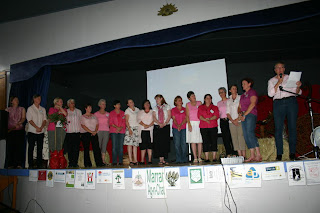 I had to make a speech as I was the person who thought of bringing Sam and Jenny to speak at a community event for our little town. All the other Ag n Chat ladies were on stage with me for moral support as I was shaking like a leaf reading my speech!! 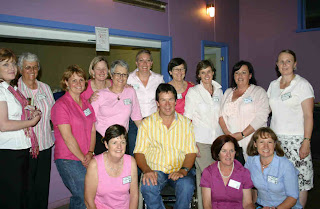 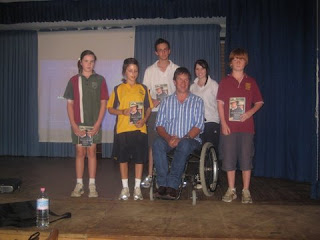 Sam spoke to the school students from the 4 small schools in our Shire. He donated a signed copy of his book "Head Over Heels" to each school library. 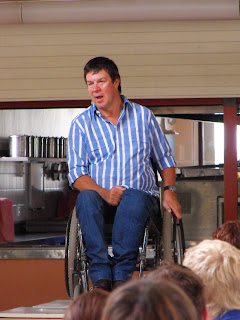 Farmer Phil and I took Sam and Jenny to Yanco Ag High School where Ryan and Emma are students, to speak there. Most of the school population are kids who have grown up on farms and have a rural background. Sam's message about wearing a seat belt and not speeding really made an impact on these kids. He even suggested writing the letter "C" for consequences and "SAM" underneath on the windscreens of their vehicles to emphasise seat belt wearing and not speeding as the consequences of both can be significant on the rest of your life. 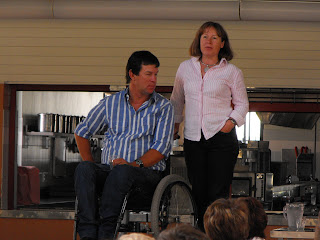 Jenny is a tiny little pocket rocket and amazing woman. She and Sam have a wonderful partnership and relationship which was lovely for the kids to see. Sam said he wouldn't change anything about his life because he reckons he's got the best life of anyone ever!! 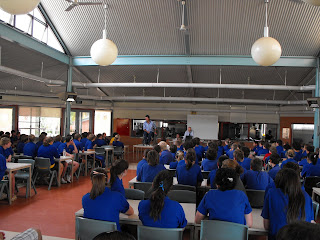 Yanco Ag had to host Sam and Jenny in the dining hall as the regular hall was being used to hold the HSC examinations. Sam asked 4 boys to lift him and his wheelchair up onto a table so that he could see all the students. Many questions were asked by the students after Sam spoke so it was great to know that the kids had really listened to his story and message. 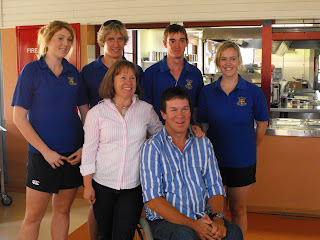 Sam and Jenny also donated a copy of his book to the library and the newly elected prefects for 2010 posed for a photo opportunity.
Posted by Donna at 9:27 AM 1 comment: