The concreters came on Wednesday to pour the floor of the new workshop.  It was a very big job for the four of them!  They started at 7am, and were still here at 8pm!  Farmer Phil and Ryan will be welding up the framework, erecting it and then sheeting the roof and walls so it may be a little while before it's finished!  Farmer Phil is very excited to be getting his very own "man-cave"! 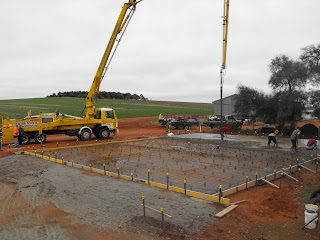 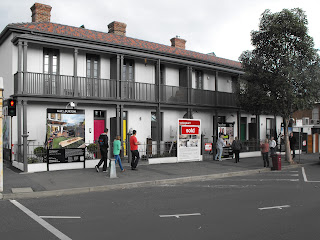 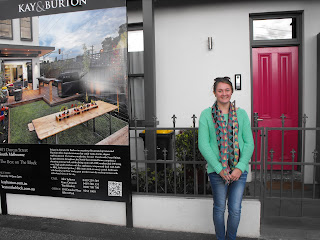 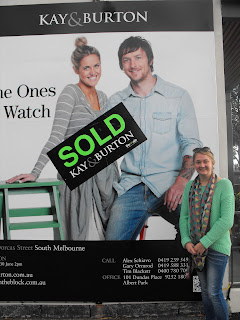 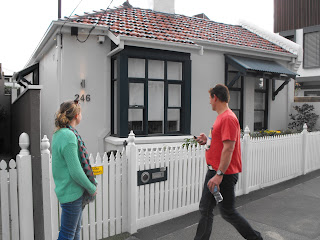 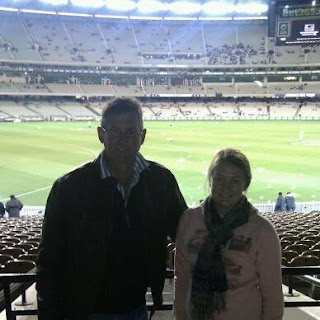 Farmer Phil and Ryan are still emptying the bags of wheat from harvest last year.  We have a local grain merchant who is exporting it straight to China on ships so it's just a matter of getting the grain out of the bags, and putting it into our two silos at home where we can sift any wet grain or chunks that have formed in the last 7/8 months, and then auger it into the truck and drive it 7km to the bulk handler.

Sound simple?!  Not really!!  Just ask Farmer Phil how much hassle this type of temporary grain storage has been when we had over 9 inches of rain in one week fall onto bags which were damaged by foxes and kangaroos putting holes in them!  The rain leaked in and made a mess with some of the bags and it's been a bit of an ordeal to get the good grain out.  We had to use an industrial vacuum cleaner to separate and suck out the good grain in a couple of the bags.

As the tractor reverses the machine, the bag is cut by a heated wire attached to the auger.  There is a sweep auger that goes inside the bag which then augers the grain up into the chase bin along side.

As the tractor pushes the machine backwards it rolls up the emptied bag onto a spindle which is released when the whole bag is emptied.  The bag is then cut up into manageable pieces and thrown away.

The grain bags are an easy solution at harvest time when you've got grain coming out of your ears and the trucks can't keep up with carting it away, so we set up the bagging machine to keep the grain away from the headers so they can keep working.  Normally we like to have all the bags empty by March, but this year it was a lot harder to sell the wheat, and then we had an unheard of amount of rain fall in one week so you couldn't even drive near the bags in the ute without getting bogged!  Then cropping was in full swing, so the bags were put into the "too hard" basket for a while.

Not sure what the solution is other than spending more money to put up extra silos at home to cart to when the bulk handlers are either full or closed overnight.  Just another hurdle to jump over as a grain producer!

Over the last few weeks we've had a builder friend of ours out on the farm forming up a large pad ready to be concreted which will be Farmer Phil's long-awaited workshop.  He's been wanting a decent shed to work in for the last 10 years, and now it's coming to fruition.  It is 15m x 18m so that it will fit most of the machinery completely in there for him and Ryan to work on no matter what the weather.  The daggy old pepper trees and piles of junk will be removed so that you can drive right through the shed.


These seed silos used to be where the shed is being built so they were dragged from their concrete footings and parked in the paddock waiting for new footings to be poured. 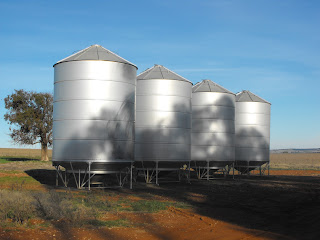 New footings ready to go.  Just waiting for Farmer Phil to finish spraying the crops for weeds, or spraying on liquid fertiliser, or spreading granular fertiliser etc, etc, etc.  We had almost 20mm of rain yesterday, so the crops look magnificent! 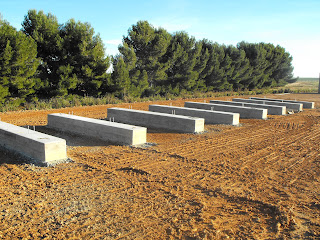 Some local wildlife left their footprints for all eternity as well!

Farmer Phil and Ryan had a quick trip to Melbourne on Monday to pick up Ryan's latest purchase - a new motorbike.  He spent yesterday afternoon assembling it.  As a mother I can only hope that there will be no accidents with this one as Ryan's waterski season is just around the corner!  He is to have his wisdom teeth out on Friday this week, so he'll be a bit quiet for a week or so recovering from that. 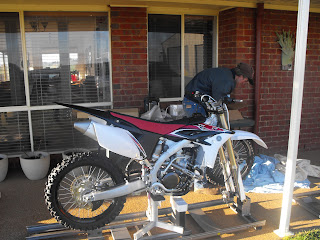