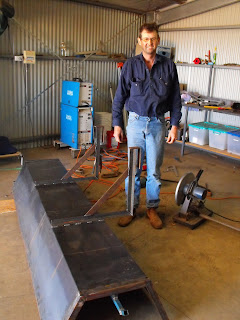 Farmer Phil has been busy this last week making a covered sprayer to attach to the back of the ute to spray the fire-breaks. His dad, Noel is using it today to get some spraying done before the weeds take over!
There is no rain predicted for at least another week and the crops are starting to struggle with no moisture. We received minimal rainfall (30mm in total) in August when the crops start looking for a good soaking. It looks like it's turning into another disappointing year for the farmer!
I said to Farmer Phil that we should be getting used to being disappointed when the crops fail as this has been happening every year since 2001!!! Older farmers comment that they've never seen a run of bad years like this in their lifetime. They experienced drought years but maybe only one or two in a row and then the following years were either back to normal or bumper harvests. We can't seem to get even one decent harvest!!
Posted by Donna at 2:57 PM