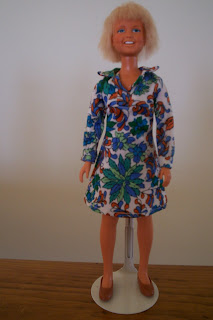 When I was a girl back in the 70's my Aunty Shirley gave me a fashion doll which I'd never seen before - I'd only seen Barbie or Sindy. She was a gorgeous girl called "Jenny" who was promoted as being a Qantas air hostess. She wore an exact replica of Qantas' real uniform of the day which was an Emilio Pucci designed jersey shirt dress. She had other costumes for when she travelled around the world exploring - she went on an African safari, rode the waves in Hawaii, travelled to Japan and went skiing in the Swiss Alps!
I loved playing with Jenny and always wanted mum and dad to buy me Jenny's other outfits other than her air hostess uniform. I never received any other outfits, so a few years ago I discovered you could buy them on eBay. Well, I just had to fulfill my childhood dream, so here is Jenny in all her 1970's outfits. 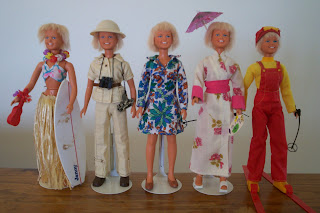 I also discovered that Jenny is in fact the short haired version of the American girl "Dusty". Dusty was promoted as a "fashion-action" doll who loved to play sport. I have lots of Dusty dolls in her 1970's outfits too, so here are a few of my favourites from my collection. Don't you just love the flared trousers, boob tubes, halter neck tops and long skirts! 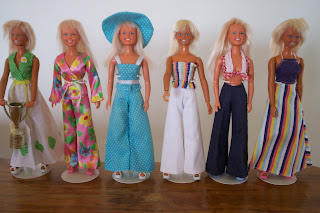 Gosh Donna, i havent seen or thought about the doll 'Jenny' in years. I bought her for my niece when she was about 3, in 1977. I forgot she had extra outfits, i can vividly remember the Pucci dress she came in & the ski outfit!! Its really scary cos ive worked for QANTAS for the last 23 years!!! Thanx for reminding me of the time i was close to my niece , & of course Jenny!
Cheers
Graeme

Wow how did you find these? I was lucky enough to have all of them when I was a child, however the dog got hold of Jenny and ate her. I would love to replace her. Couldn't see anything on ebay though but will keep an eye out.

Thanks for these comments - I'm glad there are others out there who remember Jenny!! She's such an Aussie girl and that's why I think she's great! Anonymous, if you keep looking on eBay for either Jenny or Dusty, I'm sure you'll get a collection started like mine.

Thanks Donna - I would love to get hold of a Jenny - also a Hawaiian barbie - PS I'm a Wagga girl too!

Thanks for reading my blog Leanne - how did you find it? What a coincidence that you're a local! I have a Sweet 16 Barbie from 1974 which is a bit of a collectors item now. She is the only Barbie I ever had as a girl. I had a couple of Sindy dolls as well. Keep in touch! Donna x

I was looking for information regarding Jenny and remembered that she was an air hostess so I googled "jenny air hostess" and your site came up! Thought it was funny too that you were from Riverina area. I bought the Malibu barbie collectable recently - she was another I had as a child. I want to replace some of the dolls I used to have, I have bought a Crissy and Brandi. Funny going through this at 40!!!

Donna
My mother has just given me my childhood toys with Jenny included. All I could remember was she was an air hostess so thank you so much for all the other info. My 8 year old daughter is dressing her in her Hawaiian outfit as I write! I also had the Japanese one. I couldn't remember hacking her hair off and I obviously hadn't. I can see now it was that bad all along! Thanks for the trip down memory lane. Blessed Google!

Hi i have in my possesion a dusty doll with safari outfit and sking outfit but one ski missing also an airplane playset do you know anyone who would offer good mony for the airplane playsey it has the trolley, 2 benches the tray with jug, and a coat hanger for the hanging section?
julie

Hi Julie,I would list your Dusty items on eBay as that's where I picked up most of my collection. Donna

I googled Jenny doll just out of curiosity and found so many lovely comments. I was fortunate to "be" the Jenny doll. I was a Qnntas flight attendant and did the promotion in 1976. What an amazing experience that was! One that I will always remember. I swas given a Jenny doll and have kept it for posterity. I flew with Qantas international for 15 years and loved every minute of it.