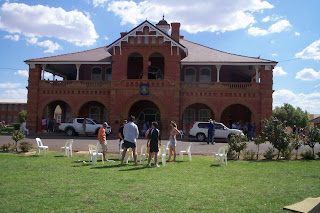 Yesterday was Gala Day at Yanco Agricultural High School where Ryan and Emma are boarding students. It is the biggest day for fundraising for the school so it's a huge day for the students, parents and teachers. There are lots of stalls to buy produce from and games and rides for the kids to play and ride. The school also shows off it's agricultural heritage and educational and musical pursuits.

This is McCaughey House which is the central building of the school. The land was owned by Sir Samuel McCaughey and when he died back in 1919 he bequeathed it to the government for a boys agricultural boarding school. 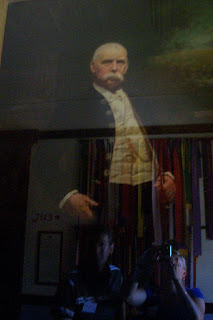 This is a portrait of Sir Samuel McCaughey in the main hall of the house. It was painted by Frederick McCubbin and was restored a few years ago and is now housed in a glass cabinet to protect it. You can see our reflections in the glass. 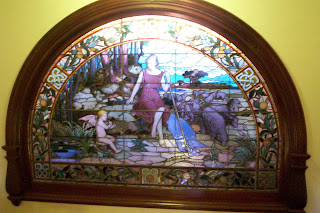 The mansion has lots of stained glass windows and this one is above the staircase. 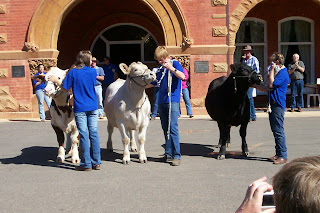 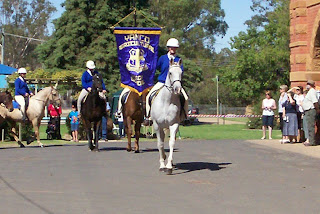 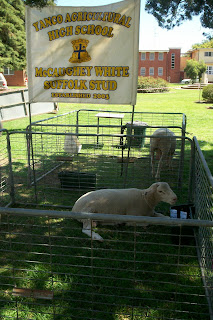 Yanco Ag is well known for it's agricultural opportunities for the students. They can participate in both sheep and beef showstock by following the local and interstate country shows to compete with the stock in parading etc. Here are three steers which are being prepared for the Royal Sydney Show which is held at Easter. The cattle are very calm and are a credit to the students efforts in handling them.
Yanco has an exceptional equestrian programme too with lots of students keeping their horses at school.
Yanco also has a White Suffolk sheep stud and there was a competition going yesterday to guess the weight of the sheep and also advertising the rams for sale.
The Drum Corp performed their march past. 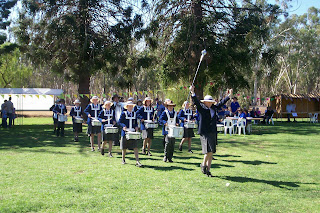 The choir performed four songs under the McCaughey verandah. 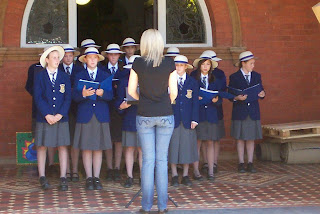 I remember when that portrait was taken down for restoration. It felt so strange to walk into the front office without being watched by him.