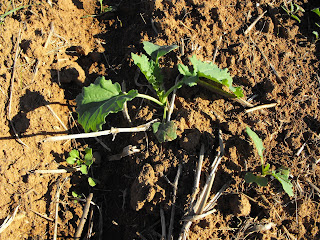 Farmer Phil and I re-sowed about 900ac of canola after the mice decimated the first sowing. Farmer Phil has been spreading bait across the wheat and canola crops constantly in the past few weeks. We think that we are finally on top of the problem but must still be vigilant.

The photo of the canola above shows one large canola plant which has survived from the first sowing, and 2 smaller plants which have emerged after the second sowing. So you can see how behind in development the plants are after being sown late. Hopefully with a wet Spring the canola will not show any effects of the mice problem. 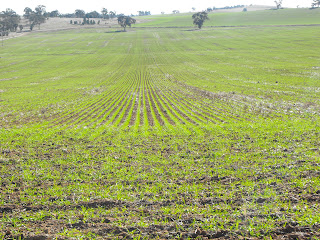 This is the wheat crop in the paddock just north of our house. As you can see it's coming along nicely although Farmer Phil has baited it twice for mice and you can still see some activity scattered across the paddock from them.
Posted by Donna at 10:41 AM