Ryan and his Surgeries 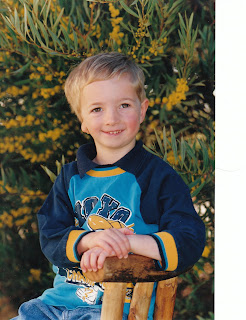 The reason I was in Sydney last week was for Ryan to have another surgery. When Ryan was born almost 16 years ago he was born with only one ear and his right jaw was smaller than the left. The conditions are called "microtia" of the ear which means "small ear", and "hemifacial microsomia" which means "small on one side of the face". This photo of Ryan was taken when he was about four and shows his little ear and small jaw really well.
After many trips to see specialists for tests ranging from hearing, CT scans, x-rays, photography etc it was concluded that he was completely deaf in his right ear, but has normal hearing in his left. There is no ear drum, hearing bones or even a hearing nerve present. There was no hope of reconstructing his hearing, but he gets by very well with only hearing from his left ear. There was concern from the specialists about spinal problems, growth problems and intellectual problems also, but Ryan has been very lucky to not have shown anything else was wrong.
The next step was to decided what to do about his jaw, so when he was six years old he had one of his ribs grafted into his jaw by the craniofacial surgeons at the New Children's Hospital at Westmead in Sydney. His latest surgery was to shorten this graft as it keeps growing as he grows and sends his jaw very crooked so that his teeth don't line up properly which makes eating difficult. He's had it shortened five times so far and the surgeons hope that it will stop growing once he stops growing which could be another five years yet.
When Ryan was ten years old he had two plastic reconstructive surgeries to reconstruct an ear for cosmetic reasons. We left this decision up to Ryan as to whether he wanted anything done about his "little ear", and he said yes he would. The plastic surgeon made an ear for Ryan with cartilage from behind his rib cage. It is quite remarkable what the surgeon achieved and Ryan was very happy with the result. He doesn't need any more surgeries on his ear, it's just the jaw which is giving him the trouble. He will also need a lot of orthodontic work done on his teeth once his jaw problems settle down.
I've lost count how many times we've travelled to Sydney to see the specialists with Ryan. It's more than a 900km round trip so I know the road there very well!! We consider ourselves very lucky though when we see lots of other children attending the hospital in Sydney and see what they have to deal with!
Posted by Donna at 2:53 PM

He's gorgeous in that pic..I am glad things are going well for him.