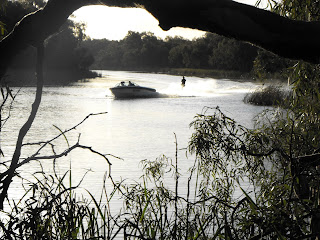 Last week Farmer Phil, Ryan, Emma and myself went to water ski school at Colombo Creek for a junior development training camp. Farmer Phil drove the boats for the week while I cooked for the camp of 25 people. 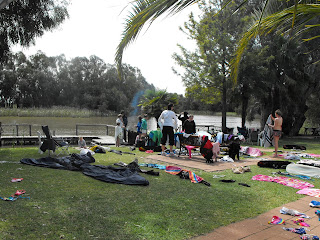 The weather was a bit fresh for the second half of the week so the kids sit around a fire bucket to warm up after they've skied. 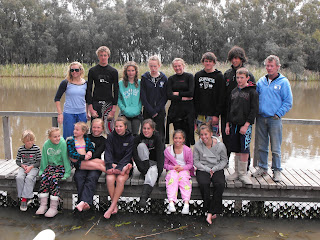 Here are the kids at the end of the week with the coaches Cap, Josh and the legend himself Brett Wing. Below is a small bio on Brett and his amazing achievements. Ryan and Emma learned a lot from Brett's coaching and we found him to be a very humble man.
"Brett Wing began his barefoot water skiing career at the age of eight, when he passed the test conducted by the Australian Barefoot Water Ski Club. After finishing third in the first national title he contested, in 1969, he was never again defeated in state, national or world overall championships.
When he retired from active competition in the late 90s, he had amassed 14 overall national titles and 69 national gold medals. From 1978 until 1982 he established a procession of world records. His barefoot speed world record of 152.8 kph, set in 1979, still stands in Australia.
In 1978 he won the overall world championship in Canberra, after winning gold medals in the slalom and start method and setting world records for tricks, slalom and start method. He defended that title successfully in San Francisco in 1980, winning gold medals for tricks, slalom, jump and start method and setting world records in all four events. Again he defended the world title in Acapulco, Mexico, in 1982, taking gold medals for start method and tricks.
He was overall champion at world Group 3 (South-East Asia) titles in 1975, 1977 and 1981, and retired undefeated as Australian overall barefoot water champion after winning the title every year from 1976 to 1982. At the USA International Masters titles, he was overall champion with gold medals for tricks, slalom and jump in 1979, 1980, 1981 and 1982.
Brett is a highly regarded coach and show skier. Brett has worked to change the attitude toward bare footing from a ski show stunt into a competitive sport, and helped to create the active international competition that we know today.
In 1996, he was inducted into the International Water Ski Federation Hall of Fame - Asian Australasian Region. In 1997 Brett was selected by American Water Ski Hall of Fame as one of the ten greatest skiers in water skiing history."
Posted by Donna at 10:00 AM