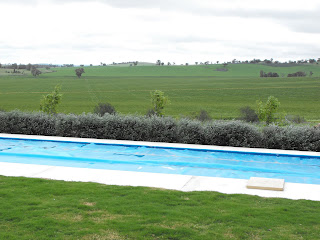 Yesterday and last night we had some very wild weather for our area. South of Wagga Wagga registered over 100mm of rain for the day with some flash flooding. We only measured 40mm, but boy did it make it wet around here. We live on a hill and our driveway provided us with some fun trying to drive up to the house!

Ryan and Emma phoned me to tell me that the school wasn't sure if their bus could get them home because of the rain and flooding. The school bus that heads to Lockhart was cancelled due to flooding so the kids have to stay at school for the weekend! Ryan and Emma's bus was half an hour late getting in, but they said the roads were okay.

Farmer Phil went to a pre-harvest meeting at Oaklands which is a small town south west of Wagga. As he was driving there in the morning he said he had to slow right down as it was so hard to see through the driving rain.

After the meeting he visited our good friends Andrew and Michelle at Culcairn where they had experienced the 100mm of rain for the day. Their crop paddocks were covered in half a metre of water with just the wheat and canola heads poking out above the water! They were busy trying to move sheep to higher ground. By the time Farmer Phil tried to leave the roads north were all blocked by flooding so he had to stay the night at Andrew and Michelle's. He's currently on his way home now and has seen marks on the house walls at Uranquinty where the flood water has been 1 metre up the walls!
Billabong Creek at Culcairn has broken it's banks and they are expecting the town to be flooded today! The Murrumbidgee River at Wagga Wagga is expected to peak (8.4m) again today with some flooding in the area.

It's freezing cold (6 degrees as I'm writing this at 9.30am!) and blowing an absolute gale here today, so I think it might be a nice day to stay warm and dry inside the house!!