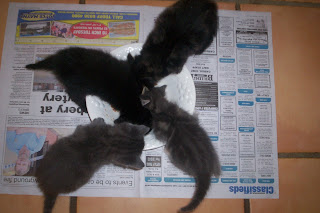 Here's a photo of the kittens eating their first meal of kitten food - Whiska's chicken tender loaf! As you can see they absolutely adored it. It makes them poo a lot more though!!

We had a very constructive weekend working in the garden. We have been waiting for a bobcat to come and dig 70m of trench so that we could install the last of the watering system. He promised he'd be here last week, and said Saturday at the latest. Well, he never showed! So we dug the trench by hand. Farmer Phil did most of the digging, but Ryan and I tried to help as much as we could. Emma was at a friend's house for the weekend, so she missed out on the fun!
It's all ready now to have the turf laid. I'm still waiting on the first lot of turf to be cut by the turf farm - the farmer said that with the drought, it's just not ready to be cut. I'll post some photo's of laying the grass when it arrives. We can't wait to have nice green grass around the house.
Farmer Phil will start harvesting again today after we had 14mm of rain on Friday afternoon. He's still stripping canola, and he's quite happy with it's yield at the moment. It looks like I'll be laying the turf on my own!
Posted by Donna at 8:57 AM