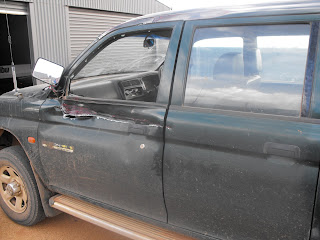 The ute and chaser bin had a bit of a bingle today with the poor old ute coming off second best! She's off to the smash repairers tomorrow to have a new door fitted, but the other damage will have to wait until after harvest to be fixed. She's been a great ute for the 10 years we've had her so we want to get her fixed up like new.

We've got about 200ac of canola still to harvest out of the 1 200ac sown - it's been very slow and frustrating. When the windrowing contractor came to windrow the canola, he had a difficult time getting it through his machine because it was laid over in places due to getting so much rain on it through the Spring. This has meant that we can only go between 2-6km/h because the windrows are so uneven and lumpy. The positive from the canola is that it has yielded way above our expectations and it's oil content has been excellent.

We're looking forward to be finally getting into the wheat crops to see how they've faired after all the rain we've had lately. We've heard some horror stories from farmers in our area about their grain being downgraded and the price/T being not very good, but we'll just have to wait and see how ours goes. At least harvesting the wheat should be much quicker than the canola - fingers crossed!!
Posted by Donna at 9:30 PM

Fingers crossed for you. Our crop was relatively good during 2010, a far cry from the extremely poor yield and prices we got in 2009. Not sure how the fields have fared during the bad snow storms of late, but we're hoping the water will drain away eventually!

we only sowed 200ac of canola - this is the first year we've grown it, just to see how it goes. The first paddock yielded 2.3t/ha and over 46% oil. I'm pretty happy with that. Reaping it is slow though. Our rows are good but still we can only get about 5km/hr when the goings good. We should finish it today and then, yes, I cant wait to pull into some wheat or durum. Hope it all goes well for you.

So pleased to hear that your canola crop has been successful, fingers crossed for the wheat crop.
Hope you get to enjoy christmas with no rain.