Last weekend we were in sunny Port Macquarie at Stoney Park for the NSW/ACT Water Ski Titles. Ryan and Emma both competed and they skied well. On Saturday night we had the annual presentation night for the Malibu Series that they compete in during the season. 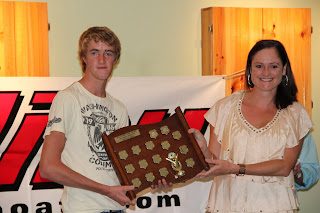 Ryan won the Most Improved Overall Skier Award which was presented to him by the gorgeous Sinead from Stoney Park. He was very pleased with himself because he has worked very hard on improving his skiing this season. The award also includes coaching sets from the experts at Stoney Park. 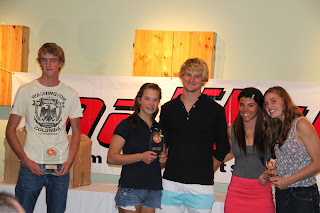 Ryan also won his division of jump for the series too. He's pictured here with Jayme (2nd), Timmy (World Overall Junior Water Ski Champion!!), Rabbit (World Junior Jump Champion and more recently winner of Women's Jump at Moomba!), and Jenna (3rd).
On Tuesday this week we're flying to Townsville for the Australian National Water Ski Championships, so I hope that there are no more earthquakes there!!

PS - Thanks to Liat for taking the photos of Ryan when my camera died before even getting to take one photo!
Posted by Donna at 8:37 AM

Congratulations Ryan!
Isn't he a streak of pump water Donna!
Enjoy your trip to Townsville. Hope the weather's kind to you.