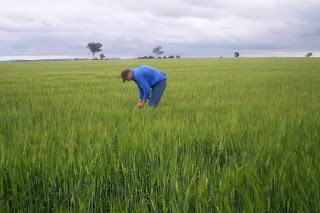 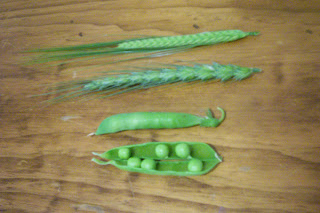 After the rain this morning, Farmer Phil and I went to look at the crops on one of our other farms which is 65km from our home farm. We measured 17mm of rain there, which is fantastic as the farm is in a lower rainfall area than home. In the first photo, Farmer Phil is checking out one of the barley crops. I sowed this paddock at cropping time, so I'm glad it's looking great!
The second photo is of some of the heads we collected. The top one is a head of barley. It is much thinner and has longer whiskers than the wheat head which is underneath.
The wheat head has finished flowering and is now filling with grain. This head of wheat is 12cm long (not including the whiskers) so you can get an idea of how big each one is. Each floret produces 5 grains in a normal season, which means that this particular head could potentially grow 100 grains of wheat. However, this head has filled 3 wide and should produce 60 grains, which means that it didn't have quite enough moisture to completely fill. We are still very happy with what we've grown due to the tough season. Last year the wheat heads were only half this size!
The field peas look great this year too, and as you can see there are peas inside. These peas are for animal consumption once harvested.
Posted by Donna at 5:54 PM